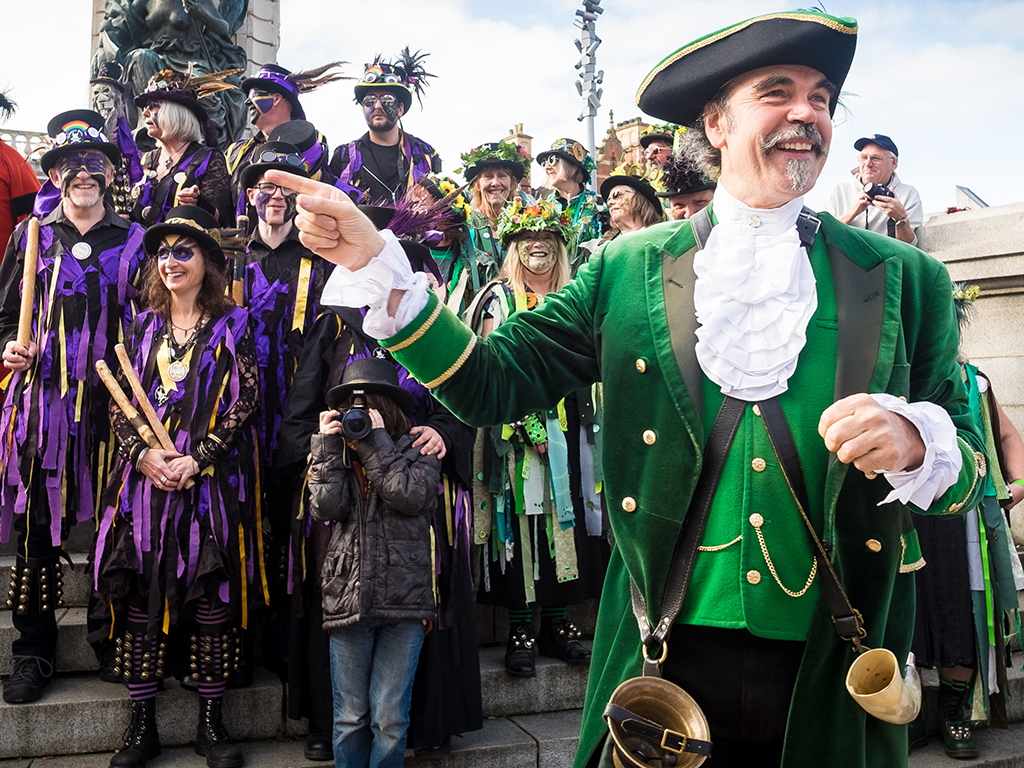 On Saturday, September 10, we’ll have teams of traditional dancers entertaining in partnership with the Hull Heritage Open Days.

The day will begin at 11am the historic Beverley Gate, scene of the start of the Civil War, where the Town Crier will launch this year’s Heritage Open Days.

Then the Town Crier and the Humberside Police Band, together with members of the local steampunk brigade and some of the traditional dance teams, will march in procession from Beverley Gate down Whitefriargate to Trinity Square for the official opening of Heritage Open Days 2022.

There will be dancing in Trinity Square, where there will be more than 30 stalls selling a wide variety of crafts and artisan foods, as well as dance spots across Castle Street in the folk festival area, linking the two events together.

This women’s team from Hull proudly describe themselves as “morris, but not as you know it”. They put their own alternative – and some might say, just a little cheeky – twist on traditional morris dances. They meet every Tuesday night at Hessle Town Hall, and, on Saturday, September 24, will be holding a taster day at Hessle Town Hall from 1.45pm to 3.30pm, when all will be welcome to come and have a go. Follow them on Facebook at facebook.com/RavingMaes.

Rackaback Morris are a mixed border team formed in January 2011. They have built up a repertoire of traditionally inspired Border morris dances with their own Rackaback twists. According to the 1811 Grose’s Dictionary of the Vulgar Tongue: A Dictionary of British Slang, University Wit and Pickpocket Eloquence, a Rackaback is “A monster with six eyes, three mouths, four arms, eight legs, five on one side and three on the other… a man on horseback, with a woman side-saddle behind him.” Some 200 years after the word ‘Rackaback’ appeared, a local concertina player gave the name to a tune he had composed. Along with a few friends he realised it would be a good tune to dance to, and the name attached itself to the beginnings of a border morris team that started to take on an identity all of its own. Rackaback dance in black with purple and a splash of gold, reflecting the association of past royalty with Hull – Kingston Upon Hull, the King’s Town of Hull. Their Rackaback tag is based loosely on the pirate’s skull and crossbones, as Hull is a city associated with sailing and all things watery. They are always interested to meet new recruits. No experience is necessary as full teaching is given. Come and enjoy the dance! Get in touch via rackaback.com.

Beverley Garland have been established in the area for more than 40 years. They dance North West clog, and many of their dances bear the names of villages in the North West of England. However, they do also create their own dances, which are then given local names, e.g. Wednesday Market, Highgate and Spark Mill Lane. Although they are a garland team they also dance with sticks, bobbins or handkerchiefs and can be recognised by their royal blue dresses, sky blue pinafores, red stockings and black clogs. They are happy to welcome everyone to their Thursday evening practice sessions in the King’s Church Hall, so whether you are a dancer, musician or would just like to watch what they do, please come along! Visit their website at beverleygarlanddancers.co.uk.

This women’s North West morris side, from Otley in West Yorkshire, were established in 1992 and they have been performing all over the UK and Europe ever since. North West Morris originated in the Lancashire textile mill towns during the Industrial Revolution and this is reflected in the figures of the dances, the use of the milling bobbins and in the names of dances. They also dance with garlands and hankies which comes from the Cotswold style of dance. The team has a good age range of dancers and musicians from 18 years upwards, and they currently have about 20 dancers, some of whom also play instruments in the band. Visit their site at buttercrossbelles.com.

Clogaire are based in Saltaire, dancing step clog in a variety of styles – with the emphasis on having a good time doing it! The club was created when the Bradford group Cloggers Row got together with Inclognito from Leeds and since they joined forces in the late 1990s they have danced at local fairs, fetes, dances and festivals. Their dances come mainly from Lancashire, the North East and Lakeland with some from places as far afield as Ireland, America and Canada. Some of them were learned from original sources such as Sam Sherry and Pat Tracey, with others picked up at workshops and courses over the years. Visit their site at clogaire.org.uk.

Otley’s one and only mixed Border Morris side was founded in 1993 and first burst on to the public stage on May 1, 1994. Since then the side has grown in numbers and they have attended many major folk festivals throughout England, dancing with sides from all over England and the USA, Australia, Romania and France. They make a lot of noise, drink a lot of beer and occasionally do some dancing… Follow them on Facebook at facebook.com/WharfedaleWayzgoose.

The flagship event of organising charity Folk in Hull:

Grateful thanks to our friends and supporters: